The mind-set of most Americans is that our government, as large and strong as it is, will always stand ready to provide the resources needed to know the history of our unsung heroes including their family’s Doughboy story. Unfortunately, this is a misconception. There are destructive elements of record keeping that even the most powerful government in the world cannot guard against. 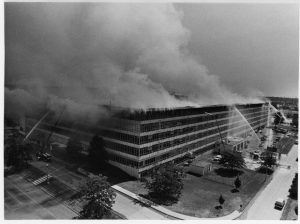 In 1973, a terrible fire at the National Archives in St. Louis, Missouri destroyed most of the records of those men and women who served in World War One. This often was the only record of these unsung heroes. In some cases, only charred bits remain of documents,  often unidentifiable. For most, there was nothing that could be salvaged. Sadly, all too often the family member researching his or her grandparent or great-grandparent receives a form letter from the National Personnel Records Center stating only that:

The record needed to answer your inquiry is not in our files…it would have been in the area that suffered the most damage in the fire…and may have been destroyed. The fire destroyed the major portion of records of Army military personnel for the period 1912 through 1959…We regret that our response cannot be more positive.

This means that the records and stories of most Doughboys are lost forever unless those stories and bits of information are shared from those of us who were told.

This post is devoted to documenting those remnants of the stories of our unsung heroes of the Great War that were shared and passed down to the next generation. Some are extensive, others are very brief. In all cases, they are communicated here, as told, without any more change than the occasional clarification. These are the stories and the information held dear to comrades and loved ones who survived, though the records did not.

Silhouette from Doughboys On The Move

Though the last of the American Doughboys of World War One passed away, there remains still the tales of their gallant struggle fighting for the rights of an oppressed neutral nation and  to oppose the aggressively tyrannical disruption of peace. On March 3, 2011, the last veteran to represent the extraordinary legacy of the World War I joined his fellow Doughboys, many who passed on the battlefields of France, but the stories of his comrades in arms should never die.

The Story of Walter, Elmer, and Jess

Bill Betten, the author of the Doughboys book series writes, “My grandfather, Walter and his brother Elmer joined the Army the same day, and both served in France in the Third Division, but the similarities of their experiences ends there. Both were shot in World War One, but in different battles, and in different ways. Walter and their cousin Jess were both seriously gassed. Both Walter and Jess survived only to spend the rest of their lives living with the terrible consequences of what the poisoning did to them. In my second book in the Doughboys series, The Yanks Are Coming, I tell of how the Germans took Walter for dead and threw him on the corpse-wagon for burial. His escape was no less than miraculous, but somehow he crawled back into No-Man’s-Land to spend days searching for help while slowly bleeding out.”

Tell Us Your Family’s Doughboy Story

Did your Grandparent or Great-Grandparent serve in World War One? Did he serve as a Doughboy, or volunteer as an ambulance driver? Was she a Y-hut secretary, or a nurse? What is the family’s Doughboy story that you know? There were so many ways Americans could serve in the U.S. and abroad. The world needs to know what your relative did, and we would love to hear your story. It is so easy to get it published. Please tell it here by first, providing as much information as you can. You may use narrative (story form), journalistic (news reporter form), memoir (simple recollection), or any form that suits your style. Agree to the rules of use, and sign the copyright permission form. Then tender your submission to our editors for approval. Upon review approval, they will either post your offering, or they may offer suggestions (usually typo and spelling corrections.)

Remember you must be a SUBSCRIBER to have your family’s Doughboy story considered. Special Offer if you SUBSCRIBE TODAY!